Justin Bieber Makes a Surprise to His Fans 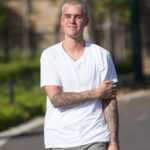 Famous Canadian singer continues his World Purpose 2017 tour and arrives in Australia. According to http://www.dailymail.co.uk, the Canadian singer was late over 30 minutes to his first show. However, he decided to redeem himself by meeting his fans outside his hotel.

Accompanied by his bodyguards, Justin Bieber approached the gates of the hotel in order to talk to his fans. He was wearing a white T-shirt and khaki pants. Fans have also seen his silver aviator glasses and tattoos.

The singer is going to visit Melbourne, Sydney, Queensland and then he is going to give some concerts in New Zealand.